Dialog at the Creation Science Museum. Traffic Laws and Morality 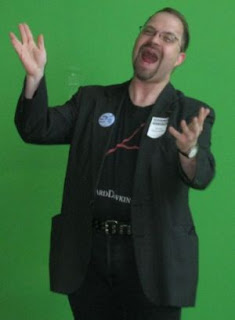 Attending the creozerg at the Creation "Museum", one of the first things that happend is I ended up in a conversation with a couple. I am there in a jacket with my Skeptic pin and my Out Campaign T-shirt. I was photographed in front of the green screen. Normally attendees at the "museum" get some dinosaurs added behind them, for a nominal fee. Somehow it was more ironic to just leave it green. So green is the color of reality.

Dressed as I was it wasn't too long before this couple asked me, "If I didn't believe why did I come out?" I think my answer was "why go to an amusement park." And thus began at least a half hour long conversation. We seemed to cover all the things that creationists want to call evolution. Which would be: evolution, abiogenesis, and big bang cosmology. Of course we also end up talking about things like geology, development of morality, and traffic laws. Yes, traffic laws. I seems way too many creationists have tried to blur the line between natural/scientific laws and criminal and civil laws. Generally summed up in the statement how can you have a law without a law giver. So for them it seems no god equals no existence of natural laws, and therefore a completely random universe. Well, a universe with no consistency and no order is probably one we could not developed in. Therefore by the Anthropic Principle we need to have some type of order in the universe.

The conversation turned rather bizarre in that they were asking me how did traffic laws evolve. Duh, we made them up because we needed them. For the longest time we had feet and horses and wagons. Probably not too complex to get along, and if accidents happen, well they happen at low enough speeds not to be a big deal. Now as soon as we had enough cars moving at fast enough speeds we had to come up with some rules. Is going 5 miles over the speed limit immoral? No. Is going 100 miles over? Well yes and no. I don't know if I would ever consider speeding by itself immoral. Speeding where you are showing reckless regard for the safety of yourself and others, seems like it would be. Actually here you have a good example of moral relativism. Can I give you an absolute freeway speed that is good or bad, no. But we can come up with rules that solve the problems better than others.

This is were we also entered the concept of group selection in evolution. All of us have some innate revulsion against killing. Also two very universal taboos are against incest and pedophilia. Why do those taboo exist? Probably because stone age tribes that didn't have them didn't do too well and were out competed by tribes who did. I pointed out to this couple, animals that have dominance contests, such as moose compete by knocking their antlers together. If you wanted to kill the other animal goring it in the side would be more effective. This would however leave a lot of dead in the herd whereas just locking antlers, solves the problem of creating a hierarchy without death.

The question that kept coming up in the conversation for items like this. "Well how do those animals know." The concept that they don't but the ones who didn't adapt this way aren't around don't seem to fit into their head. They are back to looking for the lawgiver.

The conversation ended with them saying I was smart and well read, but they didn't want to study so many books for their morals when they already had one. The very real problem seems to be their mind is made up and just don't confuse them with the facts. The Creation "Museum" is ready made for them because it re-enforces their world view and makes them think it is rational and scientific without making them think too hard. 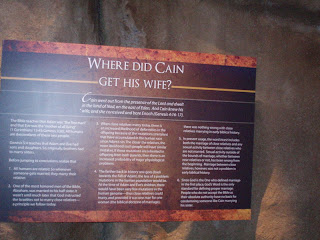 And oddly enough makes them question morals that are almost universal like incest.
Posted by Attila at 11:45 PM

Regarding laws and lawgivers: for these people, these are "natural" notions that seem to require no explanation or definition. OK, traffic laws: if you go over the speed limit, you get fined. And now, the law of gravity. What would happen if one day the moon discovered it wasn't attracted by the earth anymore? Could it get a divorce? Of course, the question is silly, because the answer is: it wouldn't and couldn't happen. This "law" is not a rule that everyone is compelled to obey. It's a description of what happens. In a perfect world, we would have literally no right to use the same word for both concepts...